Lunch buffet for a reasonable price point is the USP here!

Exotica exists in the Yerwada Panchsheel complex surrounded by IT giants like IBM, Hsbc, Deutche Bank, Master Card, BMC Software among the more prominent ones.

What that ensures is a consistent supply of patrons thronging the place at all times whether weekend/weekday or lunch/dinner.

The rush is comparable to Bbq Nation outlets and the service is mostly good with appropriate attention given while serving the starters (2 Veg and 2 Non Veg in lunch).

Though the service was mostly alright what I missed was a lack of genuine friendliness by the stewards and little or no interest in listening about any potential shortcomings in the food.

All of the above being said we still had a good experience at Exotica last week with a few parameters exceeding our expectations while others bordering around that dreaded below average dotted line.

A word of caution ⚠ please make sure to have a reservation in advance else it can get extremely difficult to get a table during the usual lunch or dinner hours.

Ambience – 4.5/5, it’s a rooftop setting covered from the top and with a lot of green plants a small water streams all around. So the Ambience is almost soothing to the eyes with the only downside that during summers it can get really warm and might be a little disconcerting.

Service – 4/5, they do take some time to warm up once you initially arrive so expect a lag of around 5-10 minutes but post that the service for starters is decent and mostly they will be able to refill just in time so you won’t end up waiting for the starters very often.

It’s an extensive buffet so I won’t be listing each and every item here but I would try and mention my experience for below and above average items.

Starters – Out of the four starters I liked one each from Non Veg and Veg. The mutton seekh kebabs were not melt in the mouth types but were not hard either and the Paneer Tikka was pretty decent as well.

Among the ones I didn’t like were the chicken starter in green sauce – it sort of confused me whether it was of oriental origin but had green chutney all over it so it wasn’t something I liked a lot but still had around 10 pieces of it 😉
The other Veg starter was a Corn tikki which I didn’t like either as well as it was too dry for my liking and when I told the same to the server, it evoked no reaction at all and the ones that arrived afterwards were equally dry as well.

Coming to the main course, it had around six variants of salads which I didn’t even look at seriously as there was a mountain of buffet dishes waiting to be scaled 😉

I jumped straight to the laid out buffet and the items worth mentioning are Daal Makhani, Chicken Rogan Josh, kadhai paneer, pasta, Hyderabadi mutton Biryani, Daal tadka and a mix Veg preparation.

What I didn’t quite like was the Olive fish preparation, as the name suggests it was supposedly a fish preparation in Olive oil wherein the fish was fresh and tender. However it seemed like someone had dropped a bowl of olive oil accidentally on the fish which had completely overpowered the dish and was a little too much for my taste buds.

Talking about desserts, there were about 5 of them and this is where they need to improve further. The litchi based mousse was quite good but everything else including the Gaajar Halwa was pretty ordinary. 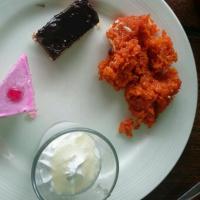