Among the best value for money buffets !

March 2015 Updates
**********************
The price of the buffet has now increased to 500 on weekdays and 550 on weekends whether Lunch or Dinner. However over a period of time, their menu has almost remained the same but their food quality and service has also remained the same which is appreciated. Request them to think about some variations and bring something fresh to the tried and tested formula.
**********************************
31st October 2014 Visit Updates
*********************** ***********
To begin with the quality of food I saw in my last outing remained consistent and they just have the most tender and tasty mutton Shami Kebabs that you can ever get. It was just awwwwesssome! If you have not tasted the kebabs you’re definitely missing out on the joy it would otherwise bring to your taste buds and as I write this I just can’t help but to try and somehow relive that experience again 🙂
Service was top notch and one peculiar thing about this place is they won’t wait for you to ask them for the refill of starters and compared to other places you have to stop them and ask not to bring any more else it would just keep on repeating.
Two of the chicken gravies were really good and tasted wonderful along with the Mutton Dum Biryani.
Last but not the least the Malai Kulfi was out of this world.
I am pleased to rate them again 5/5 and it was an extremely satisfying experience.
I am attaching some pics this time, however I couldn’t capture a lot of images of food as each time I thought about it my hands and mouth worked in perfect coordination to gobble up all the delicacies that were on offer 😉

Alright so I have been a frequent visitor on Zomato for checking Restaurant’s reviews and guilty of not adding my experiences here ):

However the meal I had last night i.e. 17th October at Oye Pape, Amanora has nearly forced me to write this review to let other folks on Zomato enjoy their Lucknawi Food Festival.

I have been to Oye Pape before and liked their setup (Dhaba setting) and courteous servers (Mr. Ranjeet) and Managers (Mr.Sam) so there was no issue in that department. They have always had a varied Buffet with 4Veg/4 Non Veg Staters, 4-5 items each in Veg and Non Veg Buffet along with Chaat counter, Ice Gola/Ice Cream, Chaas, Sweet Milk and around 5-6 Desserts.

I think the above is a really good deal for 450 all inclusive.

All the starters were fairly good with Paneer Tikka being very soft and mildly spiced, Veg Tikki was fine, Chicken Tangdi is always good and now they have replaced the Chicken wings with Chicken Tikka which was good as well. Fish starter was nicely prepared with not a lot of spices to alter the taste and with no evidence of the usual smell associated with fish, it was also good to eat.

However what came as a real surprise were the Mutton Kebabs and oh they were awesome, if anyone is familiar with Tundey Kebabs of Lucknow then these Kebabs were resembling the same taste and once I had a bite I knew the rest of the items which were part of the Lucknow food festival were going to be Authentic. I am a die hard Biryani fan and to be fair in Pune I haven’t had too many great Biryanis as they call them, at best they are chicken/mutton and rice mixed together and mostly qualify as pakke gosht ki biryani so Pune has long disappointed me on that.

So as soon as I tasted the tender and succulent Tunday style Mutton Shami Kebabs the next thing I did was in middle of starters I got a small helping of the Chicken Biryani, Mutton would have been better but I can live with a nicely prepared Chicken Biryani and it was WOW !

From that point onwards my area of concentration were the Shami Kebabs, Chicken Biryani and just to add more flavor I added Mutton Nihari to the mix which was prepared to perfection as well. It was absolutely delicious and I only got a chance to taste the Chicken gravy barely and gave the rest of Main Course items a skip 🙂

The Manager there Mr.Sam came up to check with me about the food as I had warned him in the beginning that I would realize if the food is Authentic or not and I congratulated him for living upto the expecations of a food festival. After a while as I was busy munching the delicacies I was greeted by their main Chef Mr. Naushad Khan and it was a pleasure to meet the Master himself, he’s originally from Lucknow and during our conversation when I asked him about the resemblance of Kebabs taste with Tunday, he admitted that he worked with them in the 80s and this indeed comes from the same family of Kebabs as Tundays 🙂 Superb !

After exchanging wishes it was time again to concentrate on the food and I proceeded with Desserts which didn’t disappoint me either.

The Senvayi Kheer was awesome, Sevanya Halwa and Moong Halwa were good, Gulab Jamun was the usual but the icing on the cake was the Malai Kulfi.

After around close to 2 hours of eating and wrapping it up with a Magai Paan, with a heavy heart and a heavier tummy 😉 I bid Adieu to the place with a promise that I’ll make it atleast once more before the festival ends.

I have seen some reviews which are rated as 2 which was surprising, it may have been a case on that particular day but folks at Rs 450 I don’t think there’s a better Buffet Deal with so many tasty items as is the case with Oye Pape right now. Go ahead and give a try to the Lucknawi Festival and I am sure you will not be disappointed 🙂 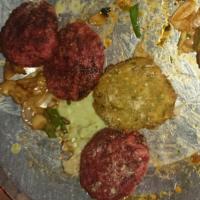 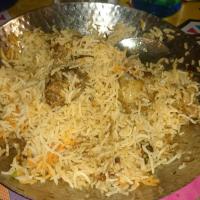