Having heard so much about the biryani twins of Hinjewadi namely A1 Biryani House and Hyderabad House it was always on my radar to visit these outlets for quite a while. Since I live in Kharadi and Hinjewadi is literally at the other end of Pune I couldn’t make it here so far thanks to the horrific Pune traffic nowadays.

Therefore while returning from one of our road trips recently from Ahmedabad we thought of giving Hyderabad house a try. After a hectic drive of close to 11 hours thanks to the chaotic Mumbai traffic though a breezy drive from the expressway we landed up at the Hyderabadi Biryani land of sorts here in Pune 🙂

Ambience – I rate them a decent 3/5 though it has enough room for improvement.

We reached there on a Saturday evening at 8 pm and thankfully there was one parking spot remaining for my car in front of the restaurant and I accepted it gleefully. There’s a full time security guard who will assist you with the parking though just towards one of the restaurant’s sideways there was another area where a number of two wheelers were parked.

As could be measured from the Parking numbers I realized that the place was almost full and as I entered there were chaotic scenes near the entrance/reception area with the entire reception area blocked by people. I was scared initially as to whether these people were waiting for a table to become vacant? Later I realized these were the folks who were waiting to pick up their parcels much to my pleasure 🙂

I quickly scanned the area 180 degree and thankfully found a table with chairs at one side and a sofa seating at the other end, visiting with a child I always prefer this type of setting so we gladly occupied the table and next step was to get someone’s attention to take our order.

Service – I rate them an average 2.5/5, definitely an area of improvement for sure.

Due to the place almost being like a Circus with just people running from pole to post I had realized that it would definitely be troublesome to get some good service and I wasn’t completely wrong. It took more than a good 10 minutes and at least couple of reminders for the service staff to give us a visit on our table and take down our order. 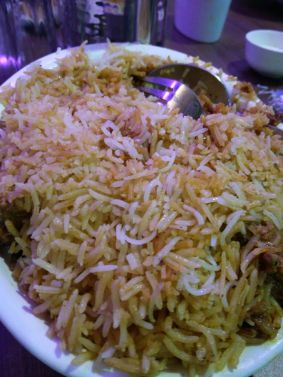 Food – I rate them a good 4/5 and the food is almost worth the hype though it’s not outstanding to be honest.

We ordered Tandoori chicken, Hyderabadi Chicken with Butter Rotis and of course the Central character of Hyderabad house – the Aroma’s Special Mutton Biryani. Here are the specific ratings and my take on each of the preparations.

Tandoori Chicken – 4/5, easily the most spicy tandoori chicken I have eaten not just in Pune but possibly most of the places I have eaten even and I just loved it as that’s the way it’s supposed to be prepared. The rating of 4/5 is because the chicken could have been a bit more tender and the dish was lacking only in this aspect.

Hyderabadi Chicken – 3/5,  it was more of a formality for me to order this as I was impatiently waiting for the Biryani but nevertheless to complete this course of meal I played along and just had a single butter roti to keep enough space for the Biryani 🙂 Coming back to this dish, it was a usual Chicken korma type gravy preparation though still different from the run of the mill ginger/garlic based gravies but I thought the dish demanded a more distinct presence of Hyderabadi cuisine as it almost tasted like a typical Mughlai Chicken Korma.

Aroma’s special Mutton Biryani – 4/5, at last came the hero of our meal and the first look was pretty impressive with the biryani not being dry and accompanied with a number of tender and succulent mutton pieces.

For some people it may taste like an overdose of spices but thanks to the Hyderabad House Kitchen Team they have tried to replicate the taste of Hyderabadi Biryani right here in Pune. For those who have tasted the original at Hyderabad and who understand the cuisine should realize that it’s supposed to be prepared spicy and boy spicy it surely was !! The accompanying saalan only accentuated the taste further and we enjoyed every single bite of the long awaited Hyderabad House Biryani.

With that cliche it’s time for me to pack my bags and being done for the night 😉 However if you’re a Biryani lover (like me) you must go to Hinjewadi at least once, I am definitely going again to taste their Mughlai Chicken Biryani.

Despite their good food I believe with the prices they’re charging they have a moral responsibility to make the dining experience a bit more user friendly for their customers and reduce the clutter that’s evident at least in the evenings and strive to improve their customer service as well. For food alone I would have rated them at least a 4/5 but if I take all the parameters into consideration then I guess a 3.5 it is ! Cheers 🙂