There’s a lot to discover if you intend to dine at Savya Rasa, starting from the meaning of their name to the various artifacts like paintings, hand made tiles, single stone carved statues to of course their different from usual South Indian preparations and what not? By any chance if history enchants you and South Indian food is your passion then you must visit them right now but please after going through and liking this post 😉 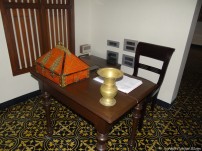 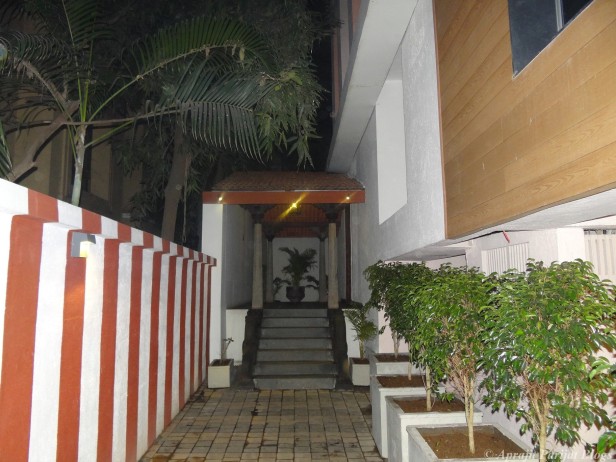 Another good reason to visit the place is to check your concept of South Indian food, if you’re the type who think South Indian food is only about dosa, idli, utthappam, vada, sambhar and similar usual suspects then again you need to have a serious reconsideration about that thought. Let me get straight to the point, in this entire food tasting experience that I had in Savya Rasa I tasted a number of items but the menu didn’t have any of the above aforementioned dishes ! The place boasts of offering their food outlined on the seven exquisite region based cuisines of Southern India namely Kongunadu, Chettinad, Nasrani, Malabar,Mangaluru, Mysuru and Nellore. 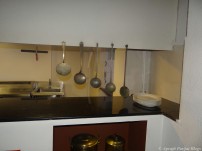 Let’s start from the start, I was part of a complementary food tasting session organized by Carpe Diem for a select few foodies on a somewhat slightly chilly evening of December 14th, 2015 and I must say I was indeed surprised by the variety of South Indian Cuisine that was served on the Day. The name Savya Rasa literally means Flavors (Rasa) from the South (Savya) or Southern flavors. I have to admit in some preparations what amazing flavors they indeed were and I thoroughly enjoyed my meal.

This has all the makings of a long review but I will try to not make it a book of sorts so would like to state my impressions of food in brief as below:

Food, I rate them an exciting 4/5, the food items you shouldn’t really miss :

Ambience, I rate them an interesting 4/5, it’s definitely very different from your usual conventional form of restaurants. Located in Gera Serenity, it’s a residential setup which now houses a restaurant and boy the atmosphere inside is Serene indeed ! They have a capacity to house 60 odd people and the tables are setup on multiple levels to give the guests a private and comfortable experience

Service, I rate them a top of the class 4.5/5, the staff were extremely presentable and knowledgeable about the dishes they were serving despite many of them not being from the Southern part of the Country. We were briefed about their test kitchen down South where each of their Staff have gone through a rigorous training of months to master the intricacies of the preparations they serve at Savya Rasa.

Value for Money, well consider this place as fine dining and for the “hatke” food you’re going to get it’s Ok to spend a few extra bucks every now and then in my not so humble opinion 😉

For the review in details please read below, happy reading 🙂

This place is located before German Bakery on the opposite side right next to a lane besides Starbucks i.e. if you’re coming from the Bund Garden side. This is one stretch of the Road where there is always lots of traffic. However once you have taken the turn towards left after Starbucks there is sufficient parking space around the vicinity of Savya Rasa to park your vehicles. This is not your conventional style of restaurant and you would realise what I am talking about only after you have visited them once. 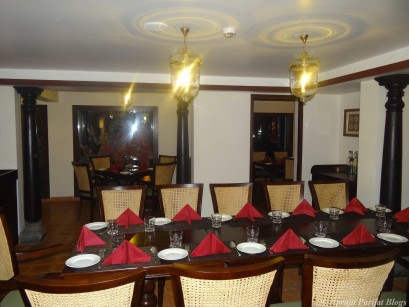 The Ambience – I rate them an interesting 4/5 on this parameter.

You have to see the pictures to understand how the ambience lines up at this place, apart from being a restaurant this place at the same time showcases some of the traditional southern artifacts that you usually would encounter only in the South. Depending on your preferences this may or may not be a big thing for some but I really liked the experience of witnessing some of the items which I usually wouldn’t have seen anywhere else let alone at a dining place. 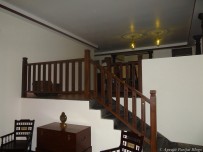 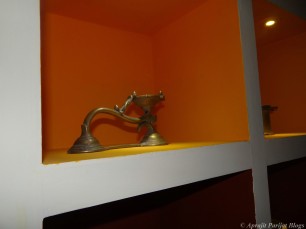 The Mirror which actually isn’t the mirror 🙂

For instance take the case of Aranmula Kanadi which will appear to you like a usual mirror but you would be amazed to know that it’s made of an alloy of probably Copper and tin (the exact combination is not known) and polished for like forever to give it that reflective property.
There are also other things to appreciate like the Murals from Ramayana, the hand made tiles or the depiction of Yali (which is partially an elephant,a lion and a horse) a Creature from Hindu mythology that is sculpted on a single stone or some of the beautiful chandeliers that you could ever witness. In case you like your history and art, the ambience of this place should definitely turn out to your liking. 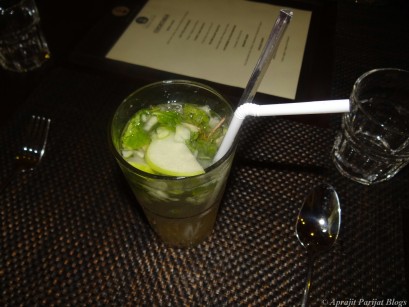 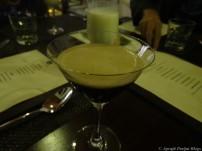 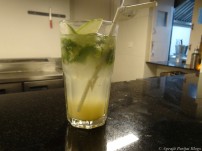 Drinks – Being a non alcoholic I didn’t have any huge expectations on this parameter and the non alcoholic mint based Mojito I tried along with a root based drink were pretty decent. I’ll leave it to the other foodies to describe about their likings in this department but from what I heard about their Betel Sour drink (their whiskey based cocktail) it seemed people really liked it quite a bit.

The Food – I rate them an exciting 4/5 on this parameter and would try to cover their specializations of five (I personally liked 5/7) types of region based South Indian Cuisine.

I can’t deny but have to honestly admit that Savya Rasa have introduced me to a new dimension of South Indian Non Vegetarian Cuisine which I was so blissfully unaware till this point. I am a foodie who loves his meals and when I eat out my usual choices roam around North Indian / Mughlai cuisine, a bit of continental and at times Indo/Chinese or Indo/Thai food and I just adore Tandoori preparations. Why am I telling all this because the satisfactory meal I had here was devoid of all of my favourite items and still I can say that I was quite satisfied with my meal.

From the starters that were served I liked the following:

Kozhi Podi Varuval – Chicken essentially cooked in Chettinad style right from the kitchens of Tamil Nadu, it was a dry roasted chicken starter with absolutely no visible sauce associated with it. However the chicken bites inside the coating was juicy to serve you just right.

Venchina Mamsa Koora – Mutton cooked as per Nellore (Andhra) style of cooking, this was understandably spicy and I liked it as much as the prawns starter. This was so good that I had to ask for a second serving, the mutton was tender, juicy, spicy and went really well with the browned onions.

Chemeen Podi-ittu Varuthathy – Prawns based starter cooked in Malabari (predominantly encompassing the Kerala and parts of Karnataka region) style which for a change I just gobbled up one after the other. The key of the preparation was the total absence of the pungent smell associated with prawns which is the foremost reason I don’t prefer them usually. On the contrary here after initially just taking a bite to taste it I ended up ordering it for the second serving as well 😉

Koon Ularthiyathu – Pan tossed Mushrooms cooked in Nasrani style (an ancient Saint Thomas community from Kerala) was the only exceptional vegetarian dish that made it’s mark on my food palate.

From the mains, my favorites were the following:

Pollachi Kari Kozhambu – Mutton gravy cooked according to Kongunadu (region comprising portions of the states of Kerala, Karnataka & TN) style of cooking. The end result expectedly was an exceptional thick gravy that had a subtle taste and aroma of Cinnamon that went extremely well with the Bun Parota.

Bun Parota – Another Kongunadu preparation the looks of which could be deceptive as it’s made with eggs and comes out nice and fluffy. This was the best bread I tasted on the day and it went equally well with the chicken and mutton gravies.

Milagu Kozhi Chettinad – Chicken gravy cooked in Chettinad style had flavors of coconut crush/milk and black pepper signifying the dish, again none of it was overpowering so had a good time with this decent preparation.

Kongu Mutton Biryani – The Mutton Biryani cooked in Kongunadu style was spiced in a subtle manner, as I had my first bite to a certain extent it reminded me of the best Mutton Biryani I have ever had in a restaurant called Krishna’s Dosa Grill in the Surrey sub-urban area of Vancouver, Canada. I would have liked it to be a bit more spicy as the flavors were just a little understated for my preferences. The Mutton however was consistent i.e. tender and juicy as the rest of the Mutton dishes so full marks on that part. One point I forgot asking was about the Hyderabadi Biryani which was evidently missing from their vast Southern Menu, something that I would love to have 🙂

Thalassery Meen Biryani – The Fish Biryani cooked in Malabari style, which I wasn’t too keen to try about… actually surprised me ! I tried it on the insistence of Mr.Dennis and I am glad that I went for it. The Fish in a biryani was a new concept for me which they seem to have mastered, I have never had the courage to try this combination before but I’ll definitely try this the next time I am here for sure.

As is evident this was a complementary food tasting session so I am not judging them on their serving time alone as they’re already well prepared for it. However the thing that is impressive is that each of their serving staff knows about the details of what they are serving speaks the seriousness of the intent they are running the place around. For someone who is not from the Southern Part of India just the names on the customized menu for our party were difficult to comprehend, however as the dishes were served Mr.Hom described all of the dishes along with their origin, major ingredients and the region it belongs to.
We were served with utmost care by Mr. Dennis and some of our demands that were outside the set menu were met with a smile and ever ready to serve attitude.

Areas requiring attention – Despite the rather wonderful meal I had, I was slightly expecting more on the vegetarian dishes and the Desserts. The only fair enough dessert I could taste was the Karuppati Halwa but it wasn’t something that would make me come back to the Place. 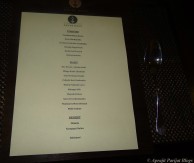 It’s a place you should visit for an introduction to a different aspect of the Cuisine down south, again their different from usual Ambience and their polite and efficient Service quality.

A special note of thanks to Carina and Shivangi (from Carpe Diem) for inviting me to this session. I also took immense pleasure in sharing the surroundings with fellow foodies – Akshay, Vaibhav, Karan and Megha, it made the experience just a bit more interesting than what it would have been.otherwise 🙂