To begin with I want to set the expectations of the readers very clearly – this isn’t your casual kind of hangout place ! It’s a very special kind of place with everything special – ranging from a serene environment/seating, very differently prepared food with special constituents with carefully thought out nutrients even in preparations like Pizza to even their neem wood cutlery.

Ambience – When I say this isn’t your casual kind of hangout place I don’t want to scare the readers away but just want to convey that the food is prepared with one and only one intention to be as healthy as possible and though it doesn’t quite compromise the taste aspect, some of it does taste unique and can be a distinct experience for your taste buds so be open and go for it ! Talking about the Ambience – though both indoor and outdoor are available my recommendation would be to go with the outside one amidst the greens which only adds up to the eat healthy feel healthy theme.

The Food & Drinks – Everything ranging from food and drinks are quite different here, following is a brief on the preparations : 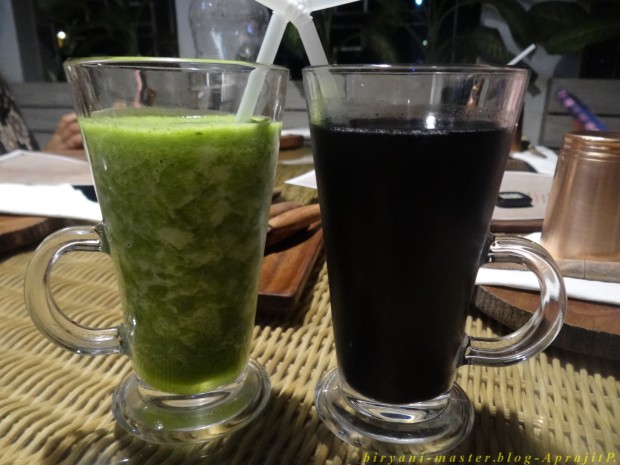 The Drinks – Both the Lemonade and smoothie were from a different league with the Lemonade tasting pretty much like lemonade but the activated charcoal adding the health benefit. On the other hand the Spinach smoothie was something which was the best drink of the evening for me. 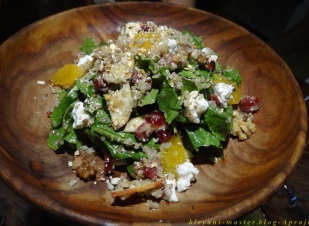 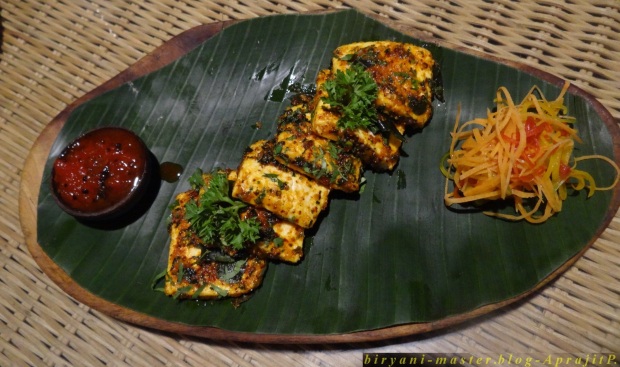 Southern spiced Cottage Cheese – This was a decent preparation though could have been more tender but the southern spices marinade was the factor which made it an above average preparation.

Spinach & Beetroot Hummus – The beetroot hummus was the clear winner and the multi-grain khakra added to the healthiness quotient yet again. It was a colorful yet flavorful preparation and for Hummus lovers this is a must order.

The Pizzas – Pizza Verde was such a green looking pizza that came with a Ragi base had all the greens going for it namely Spinach, Maithi, Broccoli and Pesto. This was a thin crust variant and never did I feel it was a Ragi crust, this one really surprised me and a pleasant surprise it was ! The Farm fresh was a colorful one with a contemporary look and it had a generous amount of cheese which made it a juicy proposition for sure and it would only be fair to say that I liked both the pizzas.

Bajra Riso – This was a take on the usual Risotto albeit a healthy one of-course, what else is expected in Sante Spa cuisine anyways and for it’s constituents it came across a lot more juicier and tastier than what I was expecting – a fair enough preparation.

Thai curried Vegetables – This was one of the best thai curries I have ever had anywhere with the brown rice providing the health quotient in this dish. I always had this visual of brown rice being very dry and rough to go with any preparation but this combination of thai curry with brown rice proved to be really handful and it would only be fair to say that I totally loved it.

The Desserts – We were served with four types of Desserts, while the Charcoal Ice-cream was too salty for my liking the Buckwheat slab cake was a little too dry for my liking. The salted caramel was pretty decent out of the two tasted so far but the best was yet to come.

Oats & Figs Smoothie – This smoothie was one kick-ass dessert and it could get as creamier as it could get while retaining some of its healthy benefits through the usage of oats and figs. If ever you could enjoy a dessert that is sweet despite being on a diet this is indeed the one for you.