This box is pretty Asian indeed !

The Asian Box Baner is a fairly new place in Baner, in addition to their presence in Koregaon Park from the last four years or so. This is one place which intends to operate like the good old Asian Food stalls in most parts of Asia where the idea is to purchase everything fresh on any given Day and prepare fresh food for that Day ! The idea though sounds pretty good but did this idea turn into something delicious to savor, read on for more…

The Ambience –  In terms of Ambience & seating, both a classically dim lighted interior seating and a well spaced outdoor seating is available for around 130 covers. The interiors are adorned with cute little lanterns, some Feng-Shui artefacts.

The indoor seating also comes with a well stocked contemporary bar along with a Sushi Bar ! This is where one can witness the Chef making Sushis on the go and gallop them as their liking, the live Sushi preparations was definitely an experience of new kind during this outing of mine.

Food & Drinks – The Food & Drinks mostly ranged from good, decent to a few slightly off the mark and the food does have the traditional Asian roots to it and one doesn’t feel like eating Indianized Oriental food. 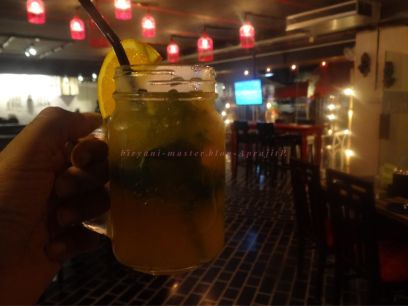 Orange Basil Mojito – My meal began with an Orange Basil Mojito and I usually prefer my Mocktails with a fruity flavor instead of superlaced with Soda. This Mojito was a mix of both fruity flavors and soda to give it that fizz and some mint leaves that made it refreshing. This was a welcome departure from the usual watermelon, pineapple & strawberry based mocktails with an Orange flavor. 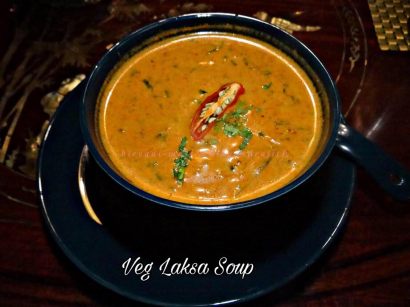 Spicy Veg Laksa Soup – The thought of tasting an Asian Laksa soup and that too vegetarian wasn’t something that exactly excited me so with minimal expectations after keeping the soup on sidelines while I sipped on my Mojito, I eventually had a taste of this soup and what a lovely preparation it turned, lip-smacking indeed. It was the best Laksa soup I had in a while, it was a bit spicy (nothing too adventurous of sorts) and had nice balance of all flavors including that of fresh coconut milk. It’s your perfect companion for a cold winter and I can only imagine that its serving in the chicken variant would be fantastic. #highlyrecommended 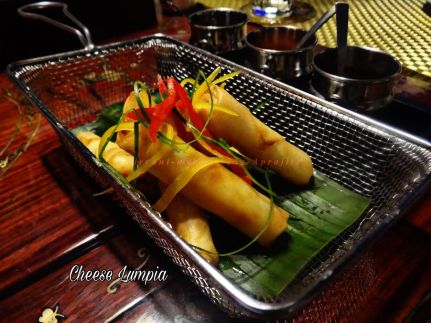 Cheese Lumpia – Another vegetarian preparation though in the form of a snack was quite gooey with ample amount of cheese filling and it was a relief to not see the dish oozing with oil which is usually the case for preparations for like these. #highlyrecommended 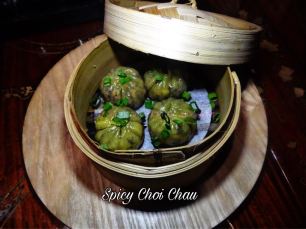 Spicy Chiu Chau & Crispy Lotus Stem – The next two vegetarian snacks unfortunately couldn’t continue the magic set by its predecessors. I found the Spicy Chiu Chau a bit bland for my liking but then I am not a great fan of Veg Dimsums usually so my opinion could be a little biased hence I am not rating it. The Crispy Lotus Stem was comparatively better but certainly wasn’t the best, it was a little underwhelming on the counts of being just a bit dry and not as crispy as I would have liked. 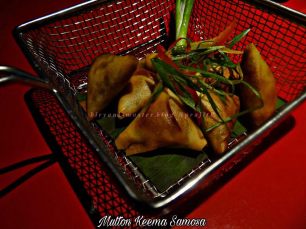 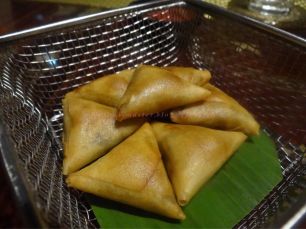 Mutton Keema Samosa – Without any doubt, this was the best snack of the evening. The Samosa was crispy and didn’t reek of oil on both the counts of taste and aroma and the mutton keema filling was delicious indeed. This is one of the best snacks to be had with a round of drinks to go with and shamelessly I had quite a few of them while it was being served on our table 🙂 #highlyrecommended 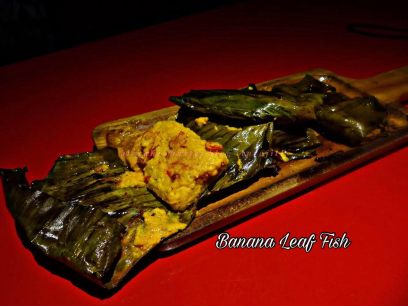 Banana Leaf Fish – I had great expectations from this one but it was a bit overcooked I guess which meant the fish wasn’t as tender as I would have liked it to be. The flavors though were minimalistic where I guess the emphasis was on the natural flavors of the fish instead of masking it too much with other spices. 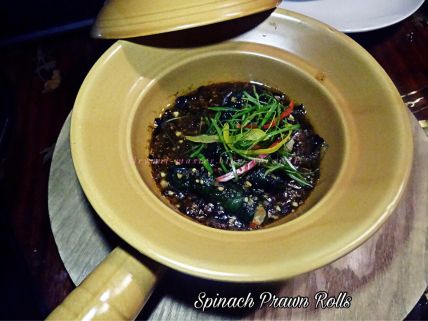 Khow Suey & Singapore Chilly Prawns –With Khow Suey being the latest fad in the food circles, believe it or not it was my first encounter with the dish and I found it pretty decent. I don’t quite have any precedent to compare it with anything that I have had before but I enjoyed the preparation. The Singapore Chilly Prawns were pretty good and spicy to my liking, they were the perfectly cooked prawn preparations that you would ever look forward to and I loved it.

The Sushis – From the Vegetarian & Prawn based Sushis, surprisingly I liked the Crispy Asparagus Maki more, it was also a bit exciting witnessing the Sushi preparations unfolding in front of us in the Sushi Bar section of the place. 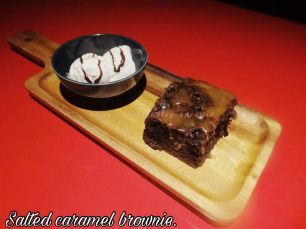 The Desserts –  The Panna Cotta came in a very different serving of sorts to an extent that it may appear as Frozen Yoghurt if you didn’t already know. Taste-wise the preparation also had a distinct Pandan flavor which is a popular leaf extensively used in South-East Asian Countries and it did lend this preparation a distinct flavor. The Salted Caramel Brownie was flawless and tasted exactly how a Brownie should and was an apt way to end a pretty decent meal !

The Verdict – Considering the overall experience of a nice Ambience, pretty decent food and value for money prices I definitely liked the place and would recommend to anyone looking for a nice Asian Meal experience.