Bubbly Brunch – these bubbles have lost their fizz !

What – Weekend Brunch (Saturday & Sunday only) paired with Casablanca Wines.
Where – Zodiac Restaurant, Fortune Select Hotel, Lavasa.
When – This is a limited period affair, call them before going.
Costs – 1584 AI without wine & 2199 AI with unlimited servings of wine. 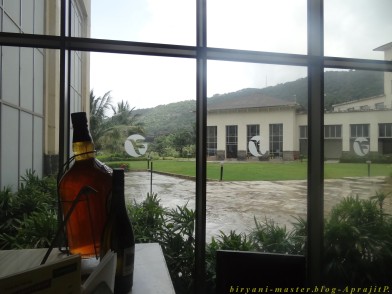 Casablanca Sparkling wines are currently organizing a bubbly brunch option on weekends in Lavasa and I happened to travel all the way to Lavasa to be a part of this and to be really honest I wasn’t really thrilled about the end result unfortunately.

This of-course was a tasting invite and when people look up to your reviews it becomes even a greater responsibility to state the facts as they are and which is exactly what I am going to do in here so the idea is not to overly criticize anyone but giving an honest and unbiased opinion on the overall experience.

Lavasa off-late is becoming a money minting machine with that rather Rs 500 exorbitant entry cum parking charge for four wheelers and Rs 200 for two wheelers. I am sure most of us can pay that amount but I would rather ask the question why to pay that charge instead of why not? Since we were part of an invite we were promised for these charges not to be levied and after spending a good 10-15 minutes on the entrance with a series of calls with Management saying “I already told Security” but Security saying “We haven’t received any calls” finally things fell into place and we were on our way to the Fortune Hotel.

The Location/Parking/Ambience – Lavasa is a small yet beautiful place to be visited in Monsoons and the day we were there was no different either. It was a day of light drizzle and we were at Fortune by 12.45 pm, they do have a Valet Parking so after doing the formalities we went towards the Restaurant and were shown in to our Table. The Ambience of the place hasn’t quite changed since the last time I was here two years ago but it comes across as pretty decent and spacious so no issues on that part. 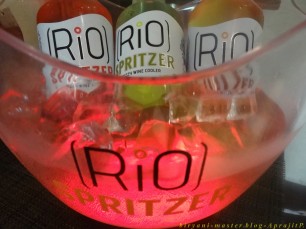 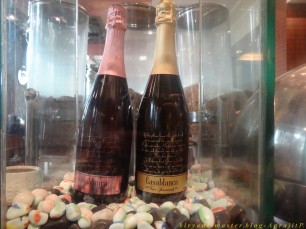 The Casablanca Wines – This probably was the better part of the meal where they have come up with Fruit based offerings of wine under the Rio Spritzer brand and their sparkling wine offerings (above picture in the right). 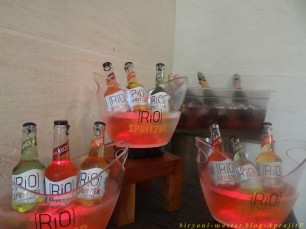 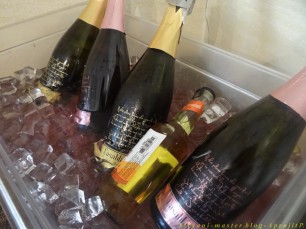 I am no wine Connoisseur however we liked the fruit based ones more, they come in different flavors like Pineapple, orange etc so that was something new. You can visualize them as an extended version of breezers however the alcoholic content is much more here compared to your usual Breezer !

The Food – So their concept is to have an elaborate brunch i.e. to combine breakfast items with a standard lunch menu. Things didn’t really went as per plan as we proceeded on the Brunch. 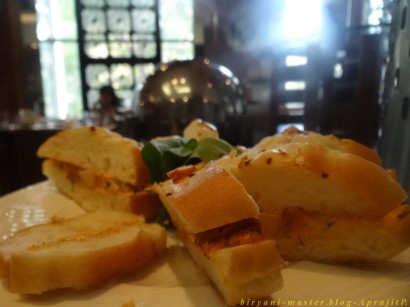 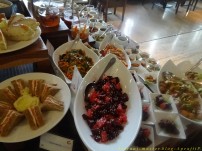 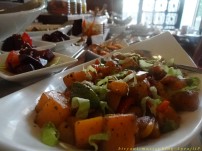 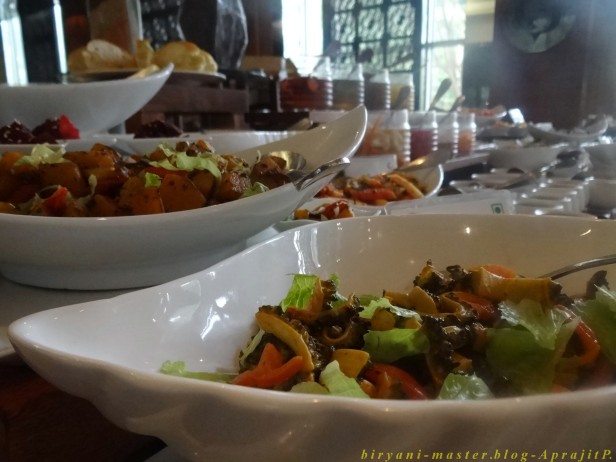 As part of the brunch they had a huge (I mean really huge selection of Salads and other tid-bits as evident in the Salads picture.From this huge spread however I really liked their variants of two kinds of cold chicken offerings, one being a chicken sandwich and other a chicken bread. I found these two items as the most enjoyable part of the entire Brunch !

For me the biggest deal breaker of the Brunch was the presence of one single starter in the entire menu and that too being Tandoori Arbi, really folks? Is that what would you expect in an elaborate brunch for the price of 1584 bucks? I would leave it for the Management to ponder over this.

However moving to the Mains, we had Egg Curry & a Continental Fish based offering to sum up the Non veg options while the Veg options had the usual Paneer, Mixed Veg, Noodles etc to make up the Menu. To be really honest except the combination of Egg Curry’s curry with Chicken Biryani which served as a decent option and because of which I could satiate my hunger I don’t quite remember any dish being out of the ordinary in the entire menu ! 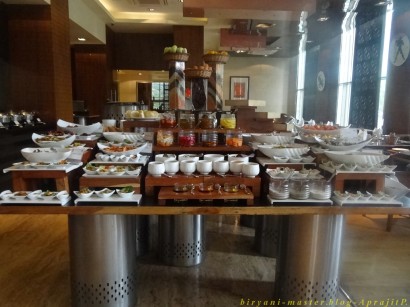 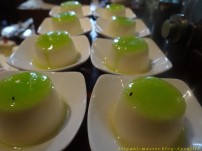 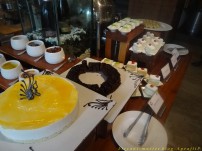 The Desserts – An array of desserts waited for us to be consumed but much like the overall theme these were at best decent and nothing really here that would make me crave for even a single dessert in particular. When your kid really goes up to serve herself a plate full of desserts but ends up sharing it with you not with a lot of enthusiasm but to ensure that it doesn’t get wasted you get an idea of the stuff being dished out.

The Service – It was mostly slow in a strange sort of way but there was one lady named Ms. Deepika who took good care of us whenever we asked something, however the key was that we had to “ask” for a lot of customary things but overall the service wasn’t too bad. I had provided a lot of feedback to their Restaurant Manager Mr.Kunal however I am not sure if they were taken with a positive outlook, I mean I wasn’t really able to gauge it so hopefully some changes would indeed take place.

The Verdict –  At 1584 / 2199 bucks this isn’t really a spread I would recommend for that taste and price combination. You may still want to take a look into this with a bit of interest if unlimited wine is your kind of thing. However if you’re just looking for food this isn’t quite a value for money proposition in my humble yet honest opinion !

Lavasa as a hill station/tourist place has always been enticing but one major grudge I have always had with the place is lack of delicious food options but this time I discovered this gem of a place !

Ambience – 4.5/5 – The Restaurant area is brightly lit up with a number of comfortable seating options – usual table type settings, sofas, round sofas etc.

We had a nice time dining out and the experience was comforting for sure.

Drinks – 4/5 – In all we had four types of Mocktails, the first one was served by Mr.Rana was not even there in the menu and they prepared it specially for us and it was the best one. It had a Pineapple base combined with Vanilla Ice-cream and we loved it. 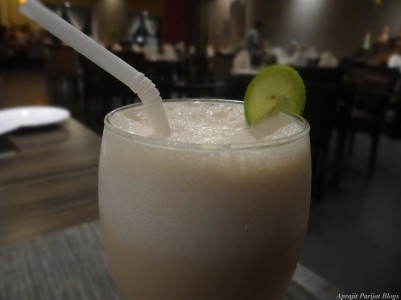 Pineapple and Vanilla based Mocktail 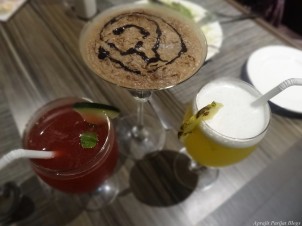 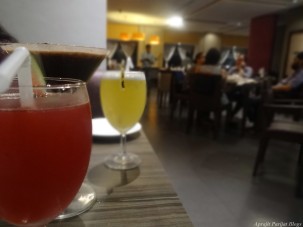 The other three Mocktails we ordered were the Watermelon/Mint flavored Berry Sweetheart (pretty good), Cola and Chocolate based Chokuzi (a strange combination – didn’t quite work) and Pineapple Zing (pretty decent).

Food – 4/5 – The meal started with a bit of a mixed bag in terms of soups not much above average and some of the starters were bland but once the feedback was provided the starters and ensuing main course was kickass indeed, a brief about the dishes as below: 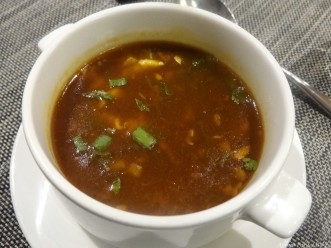 Chicken Manchow Soup – Was a bit too tangy for my liking, adding a bit more salt helped in neutralizing the tanginess to an extent but that was the spoiler. 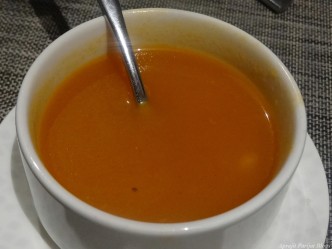 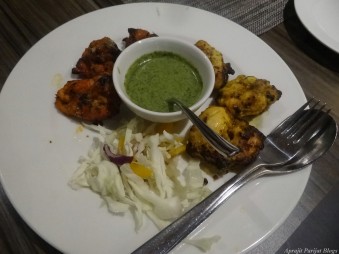 Chicken Achari Tikka – This was decent as well but the lack of relevant spices made me forget for a moment that it was an achari tikka. People who’re Okay with mild spices might like the preparation pretty good and I liked it as well but would have preferred to be a bit more spicy. #Recommended

Maithi Chicken Tikka – As the name suggests maithi flavored chicken chunks – again extremely mildly spiced and the chicken itself could have been more tender.

Adraki Gosht ki Tikki – This was a failed attempt at Shami kebab kind of preparation and it failed miserably as the resultant was a chewy, not so tender mutton patty which appeared to have been deep fried which was the last nail in the coffin for the preparation. 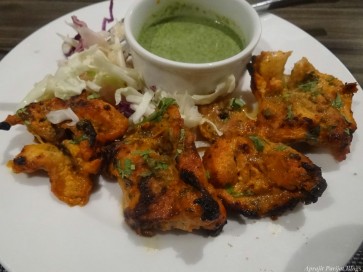 Chicken Lal Mirch Tikka – This finally was what I was looking for, a soft and tender preparation full of spices and I just loved it. #DefinitelyRecommended 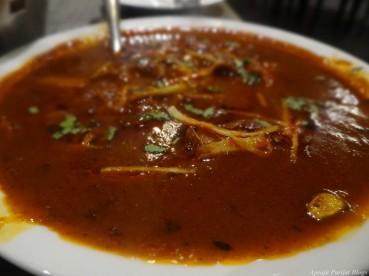 Mutton / Lamb Rogan Josh – There’s only one word to describe this – WOW ! Succulent mutton pieces simmered in a tangy and flavorful gravy further accentuated by ginger julienne giving it the perfect taste. Though the dish was mutton rogan josh it evoked strong memories of Laal Maas of Udaipur I had last year and the dish was somehow more aligned to the Rajasthani flavors. #Perfect #DefinitelyRecommended 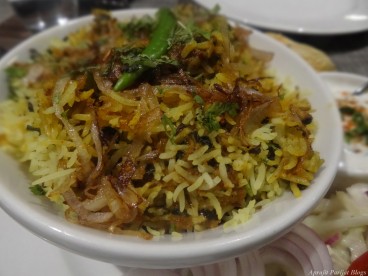 Nizami Mutton Biryani – I have a hard time searching for adjectives to define the experience and the only one I am left here with is Amazing, that’s exactly what it was 🙂 The Biryani was fluffy, moist with tender mutton pieces and the preparation was complemented with enough spices to make for a pretty good Hyderabadi style Biryani. I can vouch this is the best biryani not only in Lavasa but it can easily beat what you get at so many places in Pune ! #Amazing #DefinitelyRecommended 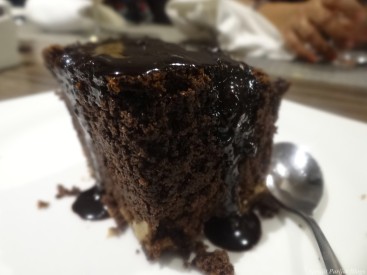 Chocolate Brownie – 4/5 – The most important factor in a good Brownie is to have it soft and if it hardens even a single bit that is reason enough to spoil the entire preparation but this one was soft and laced with chocolaty flavors and my little one absolutely devoured it.

Service – 5/5 – The service was very courteous and considerate, every little feedback was taken with keen interest and implemented instantly. Special mention is required for Mr. Rana Shil who worked at his best to make the evening a memorable one for us and even arranged for a Birthday Cake as soon as they were aware of the occasion. Our server Mr. Rahul Chauhan was on his toes in serving us and made every effort to comfort us and fulfilled all our demands. Also had couple of conversations with the Chef Mr.Mukesh Panwar who took the rather negative feedback about the initial kebab servings in his stride but returned back with the amazing delicacies in starters and main course ! 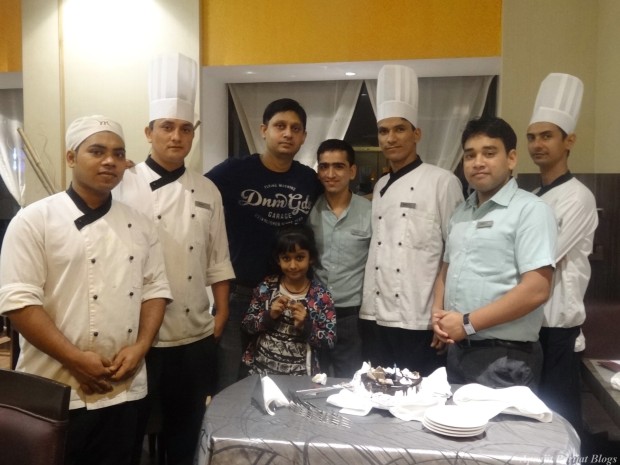 Their entire staff on the whole was extremely friendly and courteous and went out of their way to make my Birthday evening a very special one indeed.

Value for Money – 5/5 – At Rs 849 AI (through nearbuy)per person they serve dinner buffets usually on the weekends but they didn’t have a laid out buffet during the Tuesday evening we were there owing to less footfall usually during the weekdays in Lavasa. However they were extremely flexible and they allowed us to order anything from the Menu and in as much quantity we liked except for the Prawn preparations and we absolutely loved the idea and ate to our fullest.

Next time you’re in Lavasa and if you’re craving for some delicious North Indian and Mughlai food you know where to head, cheers !