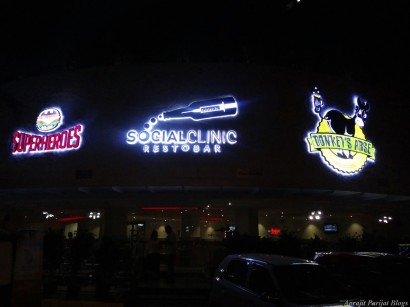 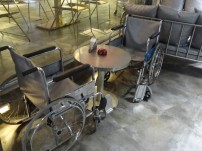 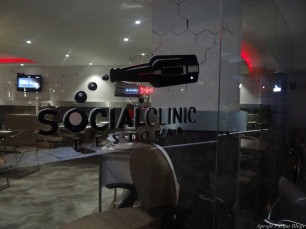 It would be an under-statement to say that Madness (owned by the DSC group) has the potential to become one of the most popular joints in the days to come. In order to achieve this they undoubtedly would have to maintain their consistency across the important spheres of Service, ambience and food.However what I experienced over an event of food tasting organized by Carpe Diem on 29th February was enough to ensure that they have begun on a positive note and are definitely here to stay !
To talk about the concept of Madness in brief – a place with three levels each offering something different from the other in terms of theme/experience while the food options remain consistent throughout.

Ground floor – The GF houses the Social Clinic where we had the food tasting session that largely attempts to capture the experience of a hospital with the male servers dressed in blue colored ward boys uniforms while the female servers dressed as nurses in Pink uniforms. In terms of seating one side of dining tables are lined up with metal chairs as in Hospitals while the other side has the more comfortable sofa seating.

First Floor – The First floor offers a rather dimly lit club/lounge type Ambience with some quirky one liners doting the ceilings in their Funky Avatar funnily named as Donkey’s Arse. While you’re here and if you do get a call from your acquaintance not sure if it would be a good idea to say that you’re in Donkey’s Arse 😉

Some people might find the artifacts here to be a bit over the top especially some of the seating designs but I found most of them pretty alright and some downright hilarious. It is at Donkey’s Arse where on specific days they have comedians from Mumbai perform stand-ups. Then there are other theme based events every now and then like the Retro Night, Ladies Night etc to name a few. Having these different types of themes/events create a dynamic feel which doesn’t let a feeling of monotony creep up which I guess is one of their USPs as well.

Second Floor – This floor housing the theme of Superheroes perhaps serves as the knock out to other competing establishments. This floor has a number of swings, trampoline and other activities designed exclusively for kids and has a support staff that takes care of the little ones at the roof-top. As you climb the stairs you cannot help but notice the larger than life portrait of Hulk threatening to tear up the wall and come in your way.
In the near future the Management plans to introduce child-centric packages where the parents can leave their kids for 3-4 hours at Super-heroes in the support staff’s care while performing their errands or shopping and what not !! 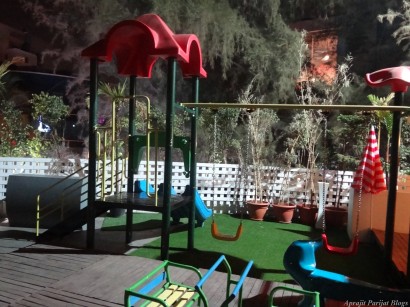 This to me was one of the most incredible concepts that a restaurant has to offer and I wish they just price it right for both kind of Customers – the ones dining in the restaurant (something that couple of us foodies suggested) and the ones not dining but just wanting to leave their kids at SuperHeroes.
They also have an app design in progress which will enable you to watch your kids on your mobile phone while you’re away which will help you to remain calm and certain about your precious ones.

Switching the focus back to the food tasting at Social Clinic, following are some of the hits and misses in various parameters in brief:

Drinks – Being a strict Non Alcoholic I kept sipping on my Pomegranate based mocktail called “The refreshing” and it was refreshing indeed. Infact I could hardly get to taste as all my co-foodies liked it so much that almost everyone had a sip of it 😉

I would let others to go gaga over the cocktails as I have no knowledge to comment on the same but I could make out Nasheeli Lambi Chai or the Long Island Beach Tea (the one with the long straw) was loved by everyone. 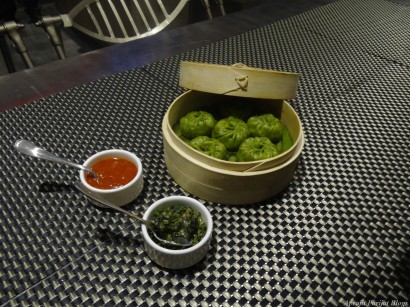 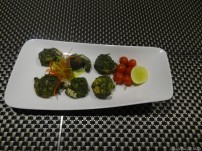 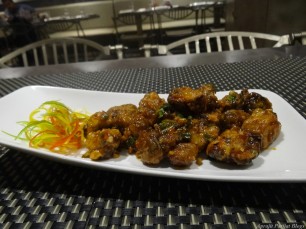 Starters  – This was undoubtedly the best course of the meal !

The absolute stand out starter was the Mutton Seekh kebab and it was indeed the best I have ever come across in Pune – sent me straight back to my growing up years in Lucknow feasting on Tunday kebabs. It was one of the most tender kebabs I have tasted in a long time which is usually the deal breaker with the rest of the places in Pune where they make it so hard that it’s a Cardinal Sin to call them Seekh Kebabs anymore 😉 It was spiced just right and had thankfully no particular spice overpowering the preparation whereas in most places usually you would find Cinnamon dominating the flavors, here the preparation was aptly and judiciously spiced.

Misses – Chicken and Prawns Gyozas (sort of dimsums) were my least preferred preparation of the evening, the stuffing with a mix of shredded chicken and prawns didn’t quite give me any gastronomical goosebumps !

The clear Winner in the main course for me was the flavorful Mutton Dum Biryani that was served in a Handi covered with Dough to preserve the aroma and flavors and OMG what flavors and aroma the Biryani offered indeed, simply Phenomenal. The mutton was nice and tender with no raw smell evident and the rice was just cooked right with a generous layer of caramelized onions, if you like your Lucknawi Biryani this is what will absolutely please you. 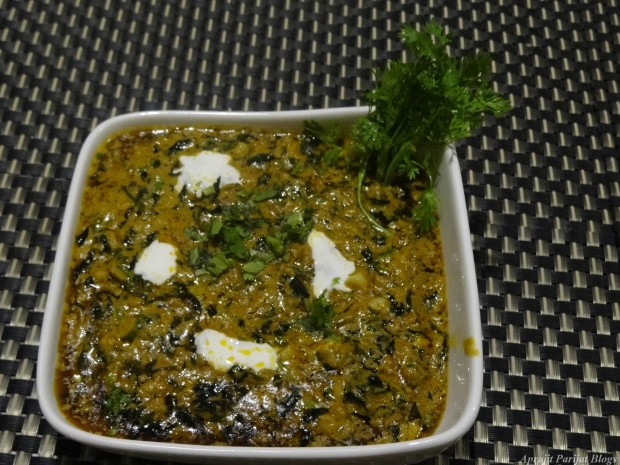 The other notable mention should be for the Methi Chaman curry, the lone vegetarian curry that went really well with the breads and wasn’t something I looked forward to taste initially.

Misses – Peri Peri Chicken Pizza and Tofu Steak (both being too bland for my liking). 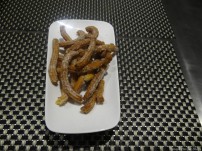 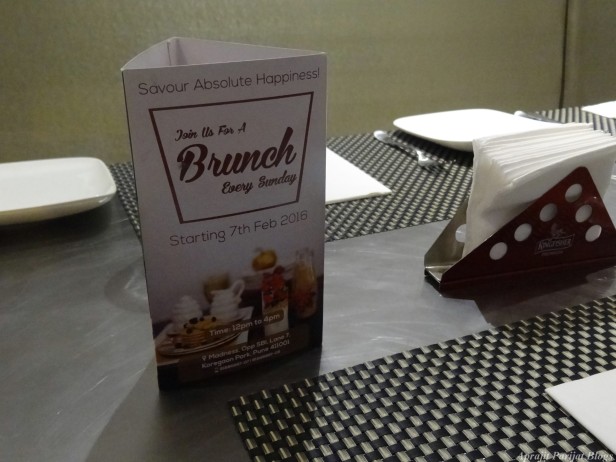 Desserts – I would rate the desserts to be on even keel with Gulab Jamun Brulee standing out, Brownie being well like Brownie but Churos wasn’t something I liked much.

Hits – Gulab Jamun Brulee and Brownie with Ice Cream (with a Caramelized Pine-apple cut at the bottom of the preparation – yummy)
The Gulab Jamun Brulee is definitely a praise-worthy attempt at the Indian-Western fusion and thankfully the Gulab Jamun didn’t appear as the forced component in this rather unusual combination. However I must say I did enjoy it !

Misses – Spanish Churos – all I could taste was Cinnamon in this but it was slightly better when dipped in the Chocolate Sauce. I guess this was because the selected version of Churos was with the Cinnamon sugar, would look forward to chocolate/fruit flavored Churos someday here.

Service – Being an organized event the service was pretty good and all the Servers were polite and courteous. However a real test would be to visit them again when in full capacity and observe the efficiency in order to truly rate on this parameter. However whatever I saw on the day was more than good enough.

Parking – Valet Parking is available at the venue so this should be the least of your worries on an otherwise crowded section of KP on week-ends.

At the end of the session we had a good amount of interaction with their Staff including Chef Bir Singh who was the Chief Architect behind the sumptuous Mughlai delicacies. He was able recreate the Lucknawi Magic here seemlessly. Also discussed with Chef Gaurav regarding the absolutely delicious Mushrooms, the soft yet crunchy Basa Fish Preparation of Roasted Nutty Fish and maithi chaman. It was good to do the chit chat and to know their perspective on the preparations. Among their other Managerial Staff had pleasant and informative conversations with Ms.Sai Budhey, Mr. Abhishek, Mr. Rishi and Mr. Sanjay (all of the DSC group).

Special thanks to Carpe Diem Team (Pracey, Carina and Shivangi) for inviting me to the event and for the wonderful company they provided for the evening 🙂

In a nutshell I can say a visit here shouldn’t disappoint you however remember to book early on the week-ends as it can get extremely crowded. It’s a must visit for sure IMHO ! 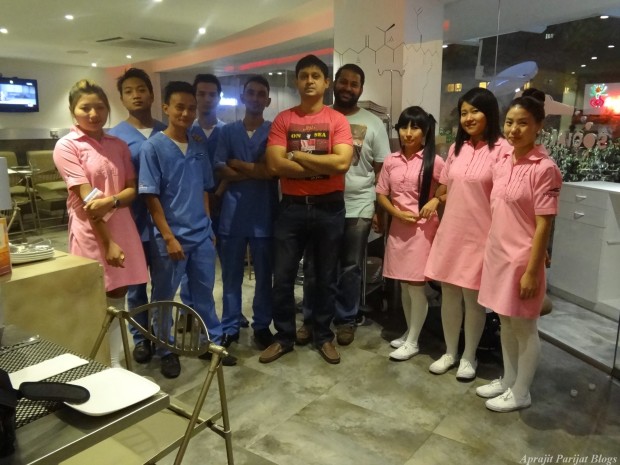 I couldn’t resist but put up a snap with the Social Clinic Servers, I am in foreground with Maanas Shah  (in the background) my foodie friend along with the real heroes of the Place !