A case of class apart Hospitality !

In my series of visiting Buffet places within Pune, my next stop on a lazy Saturday was Momo Cafe at Marriott Courtyard. Having read some of the latest reviews on Zomato I was not quite sure what I was signing up for but I must say the place pleasantly surprised me with its appetizers, desserts and warm hospitality. 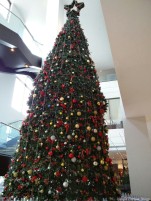 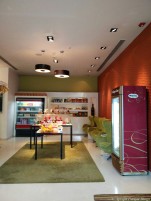 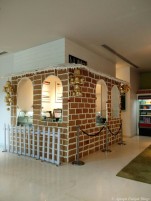 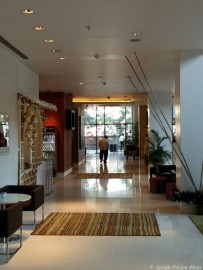 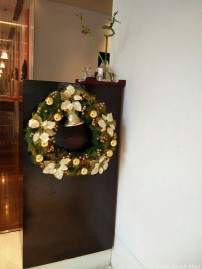 As I entered the place couldn’t help but notice the impressive lobby area of the hotel with some decorations lined up for the Christmas. The area was brightly lit and I overall liked the look and feel of the entrance and the lobby waiting area.

Ambience – I give them an excellent rating of 4.5/5

The seating is nice and comfortable and the entire dining area is brightly lit with a view of the adjoining swimming pool. There are decorated lights and colorful interiors further enhancing the overall atmosphere of the restaurant. There’s also a mini bar setup along with a display of their wine collection which makes for good viewing if you’re into the history of wines and the associated dating stuff. 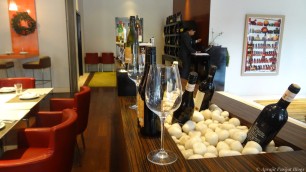 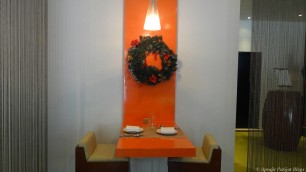 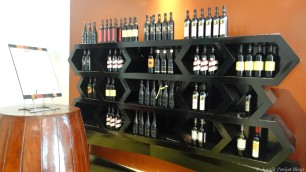 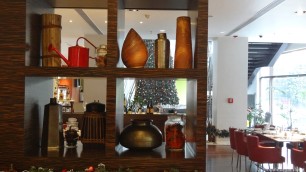 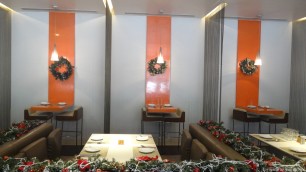 The starters consist of a veg and non veg starter each and the having read other reviews on Zomato some people are not happy with the number of their starters.

I got  chance to interact with their Executive Chef Mr.Pradipt Sinha for a while and he explained that more than 80% of their clients are corporate folks who are looking for a quick lunch mostly and that’s the reason they lay out their starters in the buffet and can’t put more than a variant each due to the want of space as other items in main course make up most of the space. I asked him if that’s the case then why don’t they keep more starters and serve them on the table? Mr. Sinha tried to explain further that during the lunch hours the place is nearly full with 60-70 folks dining at a time and it’s difficult for them to server starters on the table quickly as it takes time and the corporate folks are usually in a hurry and they don’t usually have a lot of time hence they’re following this model. It was good to interact with Mr. Sinha and I got to know more about the serving model of their Sunday Brunch at the Eviva Lounge which sounded a bit tempting and in due course I would visit them so would provide more details in that blog as and when I pen that.

Personally I would have preferred more starters but that’s really not mine or anybody else’s decision except the people concerned at the Restaurant so be their guest if you’re OK with it I guess. 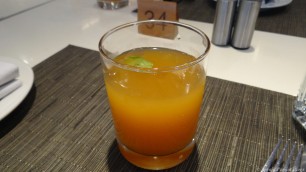 Chilly Paneer – The chilly paneer was good but had become a little soggy as a result of being kept in the buffet so we asked the Captain Mr. Abhijit to get us the fresh ones and he duly obliged. The fresh servings were really good and the standout factor was the fact that it wasn’t overflowing with oil as happens at so many places.

Chicken Hariyali Tikka – The chicken tikka with a tinge of green was very good, it had all the qualities of how a chicken tikka should be, it was tender, juicy and well roasted to give it a bit of a smoky flavor. Mr.Abhijit was gracious enough to serve the chicken on the table for us as well.

In addition to the starters one has the option to order for Pasta and Pizzas in either veg or non veg variants. I opted for a Chicken Pizza which came with a thin and crunchy crust, lots of cheese and a nice chicken topping to complement the preparation. What more can you expect from a Pizza, simply put it was pretty decent.

The Main course was laid out with a lot of Salads to choose from and I am primarily a no salads guy so except the pictures I won’t elaborate much on this front.

Some of the items I liked from Main course were the Chicken kolhapuri, dahi waali macchi, dry bhindi, green peas preparation and really loved the eggplant infused Melanzane Parmagiana. 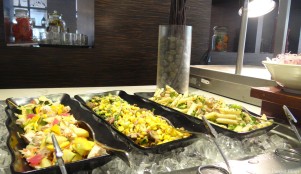 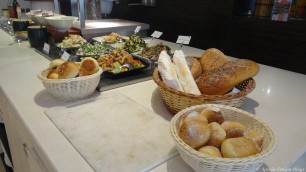 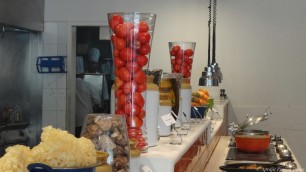 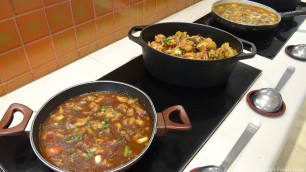 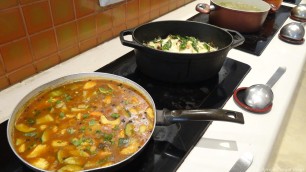 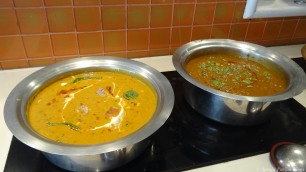 As I was having the mains, I was greeted by their Chef Mr. Hitesh who asked for feedback and I told him about the good starters, pizza and other stuff but also told him about the bland Paneer preparation and enquired if they ever keep a Biryani in their buffet. He confirmed that at times the Biryani indeed makes up in the numbers but Today wasn’t the day but he’ll check if he could do something about it. In the next 5 minutes or so I was surprised with an amazing Kadhai Paneer preparation that was served especially for us on the table and was perfectly spiced which enhanced our experience of the main course.

However this wasn’t all he asked us to take the main course a bit slowly as he was in the process of getting us a Mutton Dum Biryani. We got a perfect 5/5 Mutton Dum Biryani after waiting for 10-15 minutes and this was as amazing and tasty as the one I have had in Kabab Hut at Sun n Sand in Pune. The mutton was succulent, rice was well spiced and spaced out and one just didn’t require any accompaniments to go with the Biryani and this took our dining experience to another level of satisfaction !

Desserts – I give them an excellent rating of 4.5/5 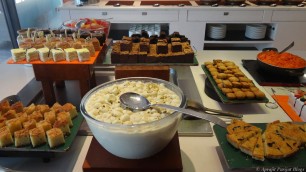 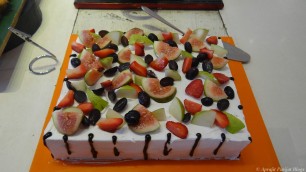 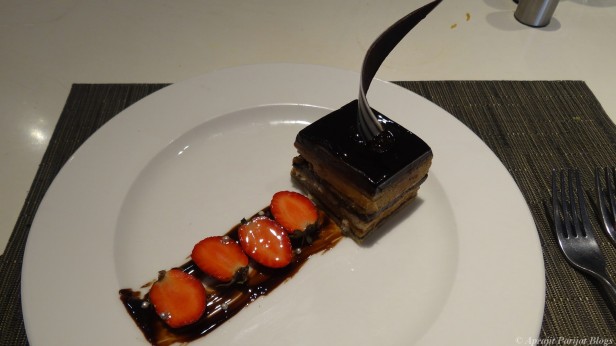 Most of the desserts were good and the best ones were the assorted pastries, the chocolate crumble cake, gajar halwa and the best of the lot was another exclusive preparation made for us (the last two dessert pics) of a dessert called Opera. This dessert had everything you could hope for, lots of chocolate, a layer of coffee and a crunchy layer in between which gave this a very unique yet amazing taste. A special thanks again to Mr. Hitesh who really treated us well and went out of his usual responsibilities to put a smile on face and make our experience an awesome one.

Hospitality – I give them a perfect and outstanding 5/5 on this parameter.

Usually I use the term service to define this parameter but in this case Today I’ll use the rather apt term hospitality because that’s really what it was and that too top notch to say the least.

Right from the executive Chef Mr. Sinha, our Captain Mr. Abhijit to the servers taking care of our table, everyone ensured that we had a rocking experience and we spent a good two hours as we lazily gorged on our Lunch buffet on a Saturday afternoon. In the meantime a big batch of corporate folks came, had their lunch and left while we were having our desserts. A special mention of Mr.Hitesh is absolutely necessary who served three dishes exclusively for us as we gently told him about the rather bland Paneer preparation in the mains and he did everything he could to ensure that we walked as satisfied customers and we were absolutely delighted with our lunch experience at the Momo Cafe Today !

I am rating them 4/5 considering what was available in the buffet along with the terrific service that was bestowed on us. However if I take the extra three exclusive dishes served to us out of the buffet into consideration (Paneer Kadhai, Mutton Dum Biryani and the Opera Dessert) then definitely the rating for my experience is 4.5/5.

My special thumbs to the place and I strongly recommend the readers to give it a try once and do let them know about your preferences as you dine. I am sure they will take a corrective step then and there itself if you don’t like something from the buffet and would try their best to make up for it.