A Mughlai Food affair to remember !

These days there are Buffets of all kind available in Five Star Hotels/Fine dining restaurants which are at times so lavish that you would never be able to relish all the delicacies yet half of the items end up just making the numbers instead of being called taste-worthy. And then there are Buffets like this one which are not so lavish in the number of items but the items that do make it to your plate are brilliant which was indeed the case when I ended up sampling their Menu on a mundane Wednesday evening.

The Menu that is on offer as part of the Fixed (yet unlimited) Dinner menu had the following (see pictures) and I must say each and every item was impeccable in taste and I thoroughly enjoyed my outing ! 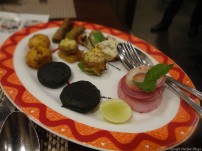 They also scored Brownie points when I requested them to replace the Malai Jheenga (prawns) with some chicken/mutton starter without sweat which was refreshing to observe as Restos these days can be extremely fussy about things like these but it wasn’t the case here. The extra half point in this review is because of the extended hospitality and no fuss service 🙂

I have spent 20 years of my life gorging on the aromatic (Lucknawi) and spicy (Delhi/Agra) Mughlai preparations and I believe this gives me a upper hand when talking about Kebabs and Biryanis in particular. I have been to Kabab hut before and one parameter I was also looking to judge was on the consistency front and they came on top here as well. A look into the hits and misses of the day in brief as below:

What can’t be missed (Non Veg)- Chicken Seekh Kebab – The bestest Chicken seekh kebab I have ever had, it was all that you could hope for – it was juicy, tender and had a silky texture which was mildly spiced yet so tasty that I had at-least ten pieces of it if not more. It was so good that it beat the Mutton seekh kebab easily.

The Hits –  Mutton Galawati Kebab (tender and juicy, would have liked a little less of Saffron essence though), Mutton Seekh Kebab (the best part that it was tender enough though not melt in the mouth category but fairly good) 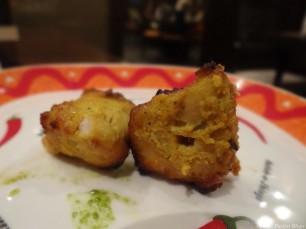 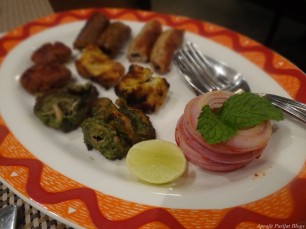 The Misses – Chicken Hariyali Kebab (the marination was ordinary and the chicken wasn’t tender though wasn’t chewy either) , Kasundi Macchi Tikka (easily the most forgetful preparation of the evening, it was dry and had an overpowering pungent smell)

What can’t be missed (Veg) – Chhaine se bhare khumb – The stuffed mushroom starter was divine to say the least and I would rate it right up there with the Chicken Seekh Kebab. Spicy mushrooms with creamy stuffing made up an almost perfect combination.

The Hits – Malai Paneer Tikka – Paneer coated with Malai which is spiced in the most subtle of manners makes up for a very good starter especially if you don’t like your food to be spicy.

The Misses – Paalak ki Tikki – This failed to leave any out of the ordinary impression as the preparation still had the raw taste of spinach which didn’t really go well as a starter dish.

The Main Course – 3.5/5 – The main course has a choice of either Daal Tadka/Daal Makhani and you could order a choice of breads. When you come to think about it that’s not an option to really write home about. However the meal focuses primarily on Kebabs and Biryani and apart from a few chinks here and there they were able to deliver what was promised i.e. awesome Kebabs and mouth watering Biryani. 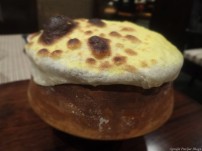 Dum Pukht Mutton Biryani  – 4.5/5 – No matter what I write about here, one has to taste the Biryani to experience that almost perfect combination of long grained basmati rice, nicely spiced up mutton chunks and that hidden spicy gravy under the white and colored rice. I really had to struggle not to stuff myself with the tasty kebabs so as not to miss out on the awesome biryani later and the strategy turned out great in the end. 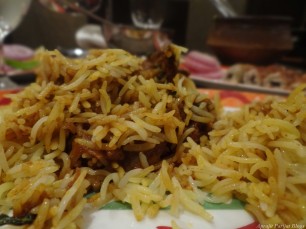 Desserts – 3.5/5 – The two options comprising of Malai Kulfi & Gaajar Halwa were not the greatest of choices available but after a heavy meal proved to be decent enough. The Malai Kulfi was how it should be however the Gaajar Halwa could have been a lot better as it seemed a bit dry and was devoid of dry fruits and khoa which could have enhanced the preparation. 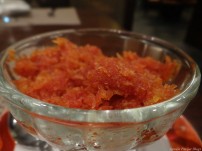 Ambience & Service – 4/5 – The Ambience was fair enough with most of the Restaurant available only to us we enjoyed a pretty attentive service as well. We were served well by Mr.Anup and Mr.Kamal and all the dishes were replenished without any noticeable lags. We also had the pleasure of meeting the Chef Mr. Chandramani Patel who dished out some really wonderful preparations and we had a nice little conversation regarding the tasty delicacies.

In a nutshell with a set yet unlimited menu I would rate the Kabab Hut very highly for Mughlai and North Indian food, go for it if you’re in a mood for some authentic Kebabs and Biryanis 🙂