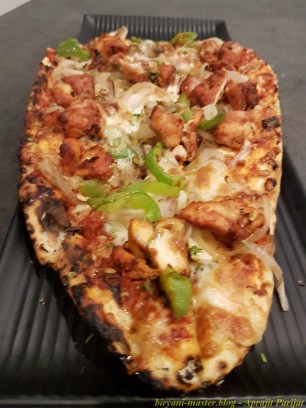 So what do you call a combination of a Naan laid out with Pizza toppings? You call that as Naanza in a place called Italy via Punjab where I had the pleasure of doing a latest food tasting. As the name suggests it is an attempt for a fusion of Italian and Punjabi cuisines. To be honest initially it seemed a strange combination to me but it certainly left it’s mark by the time I left with a heavy heart (and a heavier tummy) at not being able to try any desserts as I was so full 😉

Ambience & Location – Located on the NIBM road Italy via Punjab caters to the nearby residential properties and the setup comes with around 8-10 tables. The seating varies in the form of majority of the tables being setup outside in a covered area with coolers taking care of any heating issues and the indoor one with 3-4 tables that comes with Air-conditioning. There’s also a third variant a Cabana sort of setup for a large group of 6-10 people who can chill out together. 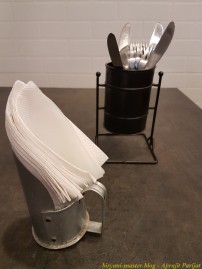 The ambience has a rustic feel to it with some innovative artifacts making up the usual restaurant setup like a “Thela” used as a Table or cushioned drums being used for seating purposes to name a few among many such occurences. It’s an attempt to be different and coupled with a dhaba kind of setting it mostly succeeds as well. 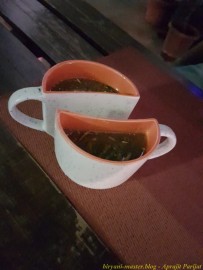 The Food – Choice is available in both italian-punjabi fusion flavours as well as Indian food so just in case if this kind of fusion is not your cup of tea all is not lost here.

In soups and starters the ones I tried were the Almond ginger chicken soup (a bit watery and overpowered by ginger), Rosemary chicken kebabs (juicy, tender and yummy) and the Chicken Tikka Bruschetta were pretty good starters to have in the fusion segment. In order to try an Indian Veg starter I specifically ordered half a serving of Dahi ke Kebab and although the consistency and filling were decent, unfortunately the curd had turned a bit too sour for my liking. I am sure on a usual day it can prove to be a good choice for veggie eaters if you want something different from a Paneer starter.

I was thinking of ordering something for Mains when Naanza caught my attention and I am glad I did as it would have been my loss if I didn’t try it. The chicken topping combined with Jalepenos, Olives and Mozarella cheese along with that crispy Naan base turned out a pretty decent offering. It almost tasted like a thin crust pizza and kudos to the Chef, a soggy Naan base would have ruined this preparation but it was crispy and the chicken chunks were juicy making it the best dish of the evening.

The Brownie shake was the only beverage ordered and it just went fine with Naanza, if tiny brownie chunks combined with creme based thick chocolate shake is your idea of your cool companion for the evening then go for it without any second thoughts, I liked it.

As we were approaching the end of Dinner and with being almost full we were faced with the Conundrum of either trying a dessert or to sample some of their Mains from the Indian menu. The choice was to be made between Tiramisu and Mutton Dum biryani and it didn’t turn out to be a difficult decision if you’re the BiryaniMaster offcourse !

The Mutton biryani was customized to be spicy as my liking and came with juicy and tender mutton chunks, it wasn’t done on a DUM but still the preparation certainly had some dum. It certainly wasn’t what you would a Biryani Connoisseur’s delight but it was pretty decent and did the job for me. One improvement which could be considered is to have a thin grained rice compared to the thick grained rice one usually finds in South Indian Biryanis.

Value for Money – It certainly is a place to get good value for your bucks and they’re not at all stingy on the quantity front either so go for it if you’re looking for a decent place to dine on the NIBM road and adjoining areas.