You get Good Biryani if they get it right !

I have had Biryani and other delicacies here over a period of time and unfortunately I have to admit that they are definitely not known for their consistency.

I am going to write pointers about a few occasions when the preparations were carefully done and consequently tasty. Once I called for a home delivery and I ordered Chicken Angara Kebab and Single Mutton Dum Biryani.
Chicken Angara Kebab was amply spiced and tasty but could have been a little tender but no real complaints and it was excellent.

Mutton Dum Biryani, when I ordered once an year ago was the best Hyderabadi Biryani I had ever tasted in Pune but unfortunately on a couple of other occasions the biryani was absolutely dry and somewhat bland.
On occasions when Biryani was good, it was generously spiced as it should be because of its Hyderabadi style and the mutton pieces were succulent and tender.

I sincerely hoped that they could maintain their consistency but it somehow didn’t quite lived up to its expectations on more than couple of occasions and that’s why I am rating them lower than what I would have liked to do. However I am not left with a lot of options. 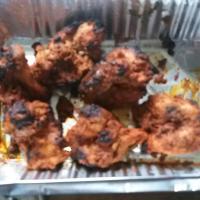